The Summer, a new form of torture in northwestern Syria. 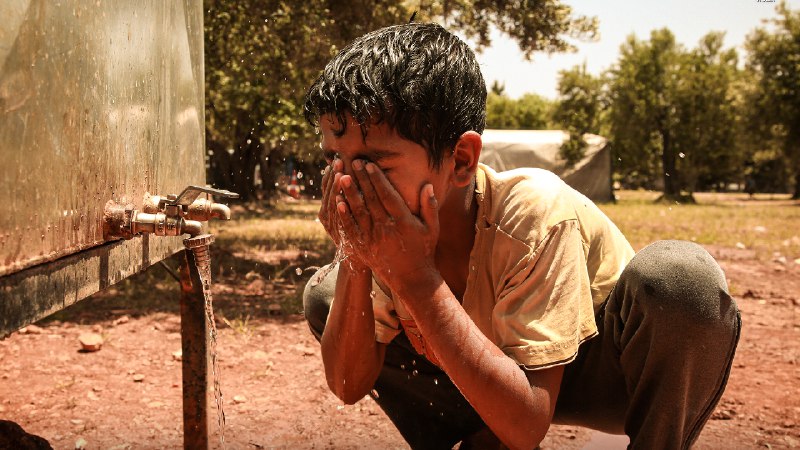 Temperatures rise again with the arrival of the Summer season, to start new suffering for the camps residents, who number over one million people in northwestern Syria, starting from their inability to secure basic materials for refrigeration such as food preservation and tents insulator, electricity outages for long periods, and fear of fires that can suddenly break out in tents, and being on constant alert for fear of any poisonous animals or insects.

“It is a form of constant torture that new displaced persons in camps are not yet accustomed to, since the temperature may reach 40 ° C, and most camps are located in agricultural areas or mountainous areas far from the cities, in which poisonous animals and insects abound, such as snakes, scorpions and spiders. Those animals go out in the Summer to search for wet and cold areas, which can be found in the shade of the tent or inside it, in order to be able to secure themselves from the heat.” says Fuad Sayed Issa, a member of the Violet management, about the situation of the camps in the Summer.

In addition to remaining vigilant of insects and poisonous snakes, camps residents need to remain vigilant for fear of any disease that can affect their children, including sun stroke, which occurs as a result of staying for long hours in the direct sun. In the Al-Wafa camp, 6 cases were transferred to medical points because of sun strokes so far.

Hour Saliha, 4 years old, a new displaced girl with her family from Ma’arrat al-Nu’man area to the camps of Deir Hassan, she died as a result of a scorpion sting at night when she was asleep, which none of her family noticed until the early morning .. In one of the camps, a call for help was launched by the inhabitants of the camp after observing a snake more than two meters in length inside one of the tents, which was not the first to be observed in the same camp.

And the constant fear of the camp residents remains as there is not enough medical care in their area, or difficult access to it in time after being stung by poisonous animals or other injuries.

“The monitoring and evaluation team in Violet was able to observe 15 camps in the Syrian north where snakes, scorpions or spiders spread this summer while observing cases of stings among camp residents, where in the Nasaem Al-Sham camp, more than 20 scorpions have been observed and killed daily by the camp residents. Most of burrows of animals are among the tents, and the reason for their existence is that most of these camps were established quickly and randomly after the recent displacement operations, and their lands were not subject to a process of clearance or rehabilitation.” Issa says about the camps where the presence of poisonous animals has been observed.

Fires were observed in several camps, as a result of high temperatures, which require intervention from the civil defense to control and put them out, as summer temperatures may reach over 40 ° C. Fires break out due to the lack of sufficient awareness among camp residents and the presence of camps on dry lands.

From death to daily suffering, as a single cube of ice has become around 3,500 Syrian pounds (US $2), most families need no less than two ice cubes daily to use for drinking and cooling, which is difficult for families to secure on a daily basis due to the lack of a stable monthly income as a result of the lack of enough employment opportunities, the value of the Syrian pound has decreased by twice the value, along with the increase in the prices of basic foodstuffs.