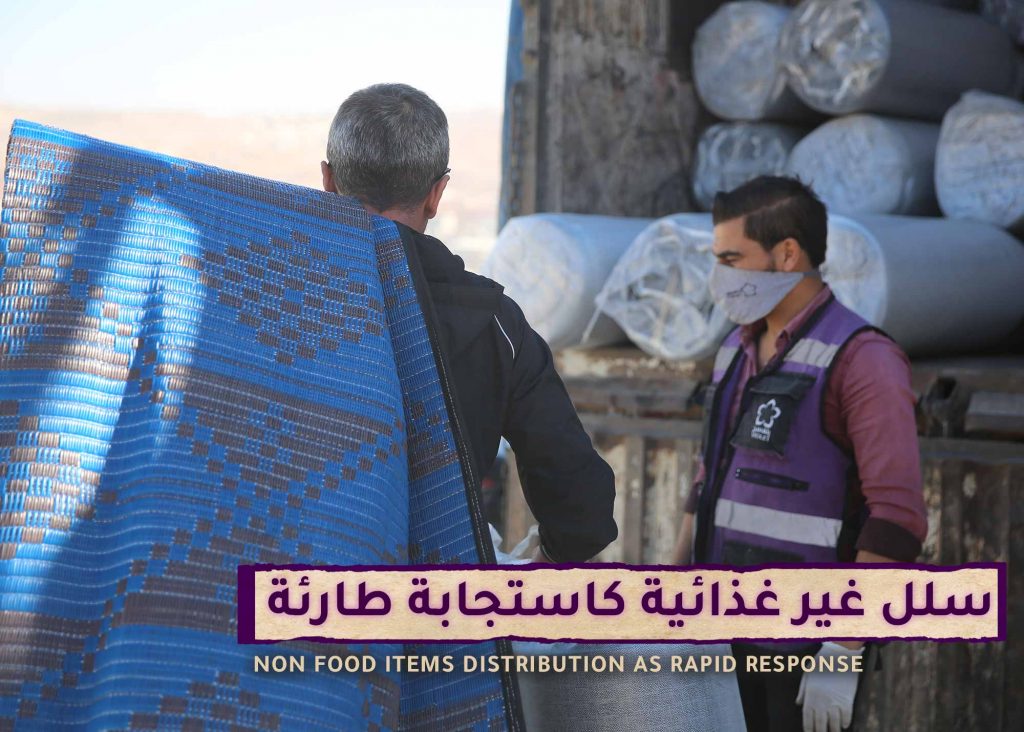 Distribution of non-food baskets as an emergency response

As the Syrian crisis enters its eleventh year, we listen to the wishes of the displaced to return to their homes and the children’s dreams of a warm winter in which the cold does not infiltrate their small bodies and the rainwater does not drown their tents and force them to migrate to other camps or stay in the open.

Another winter but the suffering is the same!

Every winter, the same scene is repeated for the residents of northern Syria in general and the camp residents in particular. More than 6.9 million displaced people, including two million people, live in 1,760 camps.

Families in the camps suffer from poor conditions in the camps, which lack basic infrastructure such as roads and sewage networks, depending on the nature of the areas in which the camps are set up. There are no drainage channels or earth barriers that prevent water from collecting, especially in camps located in valleys or between torrents, in addition to unpaved roads that impede movement, which often turn into puddles of mud after every rainstorm, but the suffering is no longer limited to camp residents only, but also reached houses, according to a report published by the Syrian Civil Defense Forces, in which it said that the damage affected the houses in which some walls were demolished in the cities of Ariha, Sarmin and Jarablus, and in one of the camps near the city of Marae.

For his part, David Beasley, Executive Director of the World Food Program for the USA, said, quoting Syrian mothers he met during his recent visit to Syria: “With the coming winter, they are stuck between the jaws of pincers. Either they are able to feed their children in exchange for their inability to warm them, or keeping them warm but without food, they can’t afford fuel and food.”

Northern Syria is witnessing a rise in food and non-food prices due to fluctuations in the Turkish lira, which has become the official currency in Idlib Governorate.

In response to the tragic conditions of more than 4.7 million people in northern Syria, Violet Organization, in partnership with Care Organization, distributed non-food baskets that contain (mat, mattresses, blankets, in addition to water bottles and emergency kits) to 700 displaced families from the most vulnerable in Al-Zeitoun camp in Kelli area, north of Idlib, to cover the families’ need of non-food items.

Yahya and Muhammad… Beneficiaries of the Non-Food Baskets Project

Yahya, 35, was forced to flee with his family from the city of Aleppo several years ago. During their first displacement, they lost everything they owned, and later they had to flee two more times until they settled in the Al-Zeitoun camp. In Killi, north of Idlib, where they live in a simple apartment consisting of two rooms and a kitchen.

Yahya suffers from a disability since his childhood due to a high fever. Yahya was unable to obtain treatment because it was not available in northwest Syria, or because it was too expensive, Yahya says, “I hope to have some money to meet the needs of my family, I have two children and my mother lives with us. I am trying to look for a job, but I am starting to lose hope of finding a job that suits my health.” Yahya benefited from the distribution of non-food baskets provided by Violet Organization as part of the response project to families residing in the camp.

40-year-old Mohammed was forced to flee with his family for the third time in several years. The family is currently residing in Al-Zeitoun camp in Killi, north of Idlib.

Muhammad tells us: “our suffering began years ago when we gave birth to two girls with permanent disabilities, as my eldest daughter Farah suffers from a disability in the lower extremities, while her three-year-old sister Raghad suffers from brain atrophy.” Then he continues: “I tried for years to bring them into Turkey through the medical system to receive treatment, but I could not because they were considered “non-emergency cases”, while I suffer a lot to this day in securing their medical needs due to the high cost of treatment and my low income.

Through the emergency response project implemented by Violet Organization in the Al-Zeitoun camp, the family benefited from the activity of non-food baskets.