Ahmed Al-Jarrad. A success story from the protection team 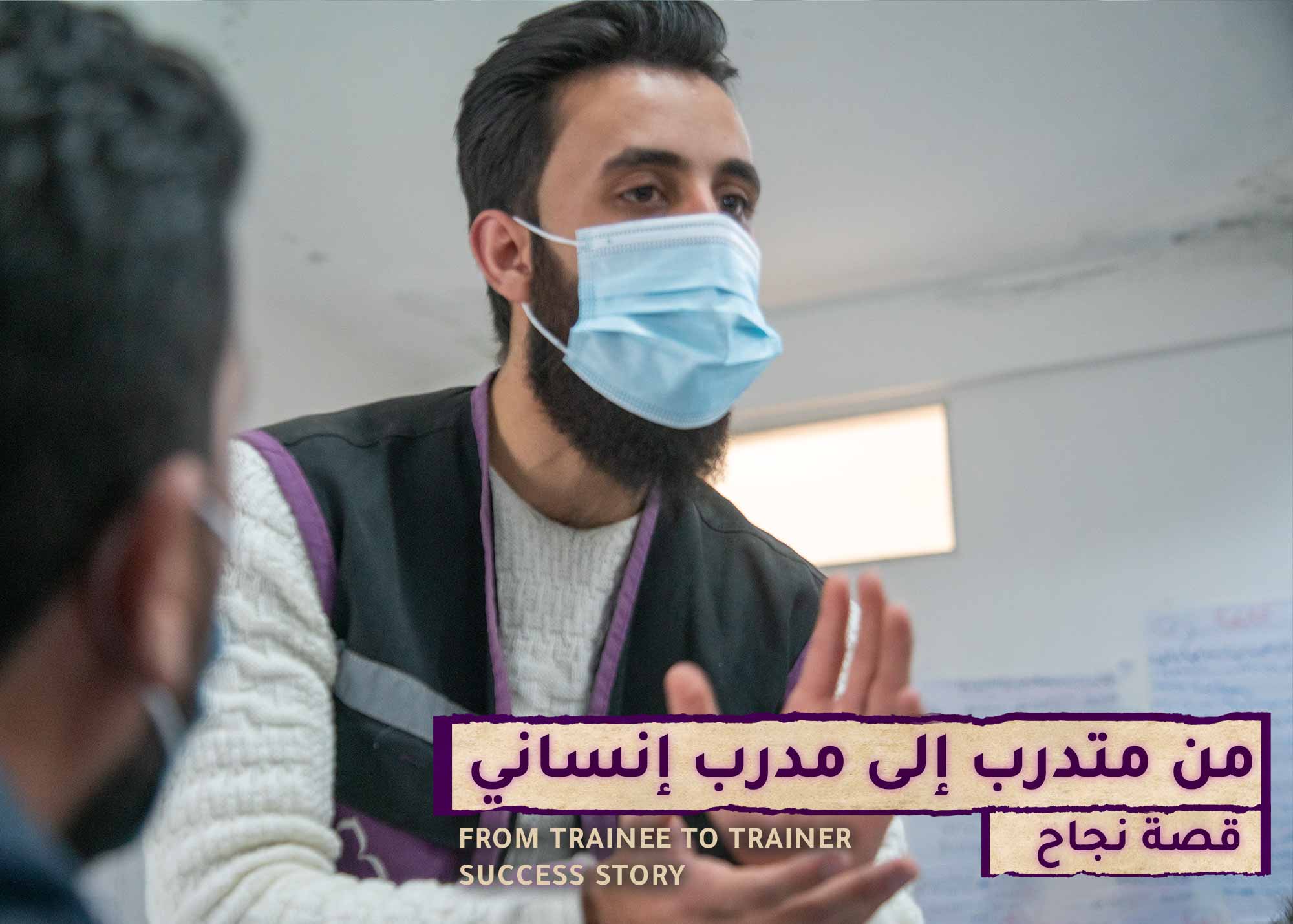 The protection team has a positive impact on people’s lives. It contributes to spreading optimism and hope among children and others through its various programs, while in return, it changes the lives of those working in this team’s programs.

Ahmed Al-Jarrad is an example:

Ahmed is a 26-year-old young man who studied management sciences and is working currently as a coach in the Youth Empowerment Department and team leader in the protection team at Violet Organization.

While working with Violet, Ahmed underwent many courses and training that purified his skills, such as first aid, child protection, gender-based violence training, training in preparing psychosocial support activities, friendly spaces and case management, suicide prevention, as well as a Diploma in preparation of trainers.

Ahmed’s career began as a volunteer in the response team then he became a worker in the protection team. During his volunteering period, Ahmed provided big number of volunteer hours in response operations to the forcibly displaced from Ghouta, Homs, and Aleppo. He also contributed to providing protection services and psychological first aid to the displaced during the response to the city of Ma`arat al-Nu`man.

later, he held the position of team leader in the field of protection from sexual exploitation and abuse, during which he provided awareness sessions on this topic (PESA) to large groups from different segments of society. Then he starts working in the field of training with the Youth Empowerment Department of Violet Organization and provided training, including:

Awareness sessions were provided to the beneficiaries of Violet’s services and the service providers as well to raise awareness regarding the proper methods of dealing and the mechanism for reporting any case of sexual abuse or exploitation that could occur.

Ahmed also provided 240 training hours for Corona Response Team volunteers was attended by many volunteer teams in Idlib and its countryside to be able to provide information about the Corona virus to different segment of society, in addition to mobilization and advocacy exercises aimed at training participants on delivering the idea of ​​prevention of the corona pandemic to the community, mobilizing the media, local organizations and local councils, and directing them to the necessity of educating the community about the Covid-19 pandemic. In addition to his participation in 220 training hours on project management within a task to support the projects of 80 trainees with financial grants.

Ahmed also provided 240 training hours for Corona Response Team volunteers were attended by many volunteer teams in Idlib and its countryside to provide information about the Coronavirus properly to society, in addition to the mobilization and advocacy exercises that aimed at training participants on delivering the process of ​​prevention of the coronavirus to the community, mobilizing the media, local organizations and local councils, and directing them to the necessity of educating the community about the Covid-19 pandemic. In addition to his participation in 220 training hours on project management within a task to support the projects of 80 trainees with financial grants.

Despite the dire situations, we are still steadfast:

Ahmed tells us one of the situations he faced while working with the protection team, where he told us: In one of the protections sessions, we usually provide during the holidays, all the children were pleased with the activities and asked us to draw their favorite cartoon characters on their faces. One of the children approached me after he was hesitant and asked me to draw for him, When I asked him about his favorite character, he said to me: In fact, my mother did not allow me to paint on my face, but I think she does not mind now from her place in heaven, as my father told me.

Ahmed also tells us: Sometimes it is difficult for us to bear the burdens of humanitarian work and the effects of the painful situations we face but hope re-imposes itself with every child’s smile.

The program began as an idea for an affiliate team for Violet’s youth program, but the idea soon evolved into a standalone program in its own right. In 2018, the program was launched in light of the momentum of the ideas of protection providers in northwest Syria, which called for finding distinctive ideas and applying them in innovative ways away from cliched methods.

The program was launched with an employee and ten volunteers, but with the persistence and creativity of the team, it recently reached 35 employees and 20 volunteers.

The program aims to alleviate the psychological pressures on children and different groups of adults through 3 main sections, which are child protection, gender-based violence, and the humanitarian cases section.

This program was among the distinct projects that were not limited to the usual activities of the protection teams but took a different approach that drew the attention of information agencies and attracted support for the implementation of various projects.

In conjunction with this year’s Tokyo Olympics in Tokyo, Japan, a Violet protection team launched the beginning whistle for the Olympics, called the Tent Olympics, in the harsh conditions of the displaced inside the camps in northern Syria.

The Olympics aims to convey and highlight the suffering of children in a way that mimics their reality.

120 children from 12 camps competed across 6 different teams to earn medals in various games such as athletics, gymnastics, football, and karate, as well as javelin, horse riding, and long jump.

The event, held on the sidelines of the Tokyo Olympics, was covered by the major media through hundreds of different reports.