Mohamed is a success story from the ambulance team 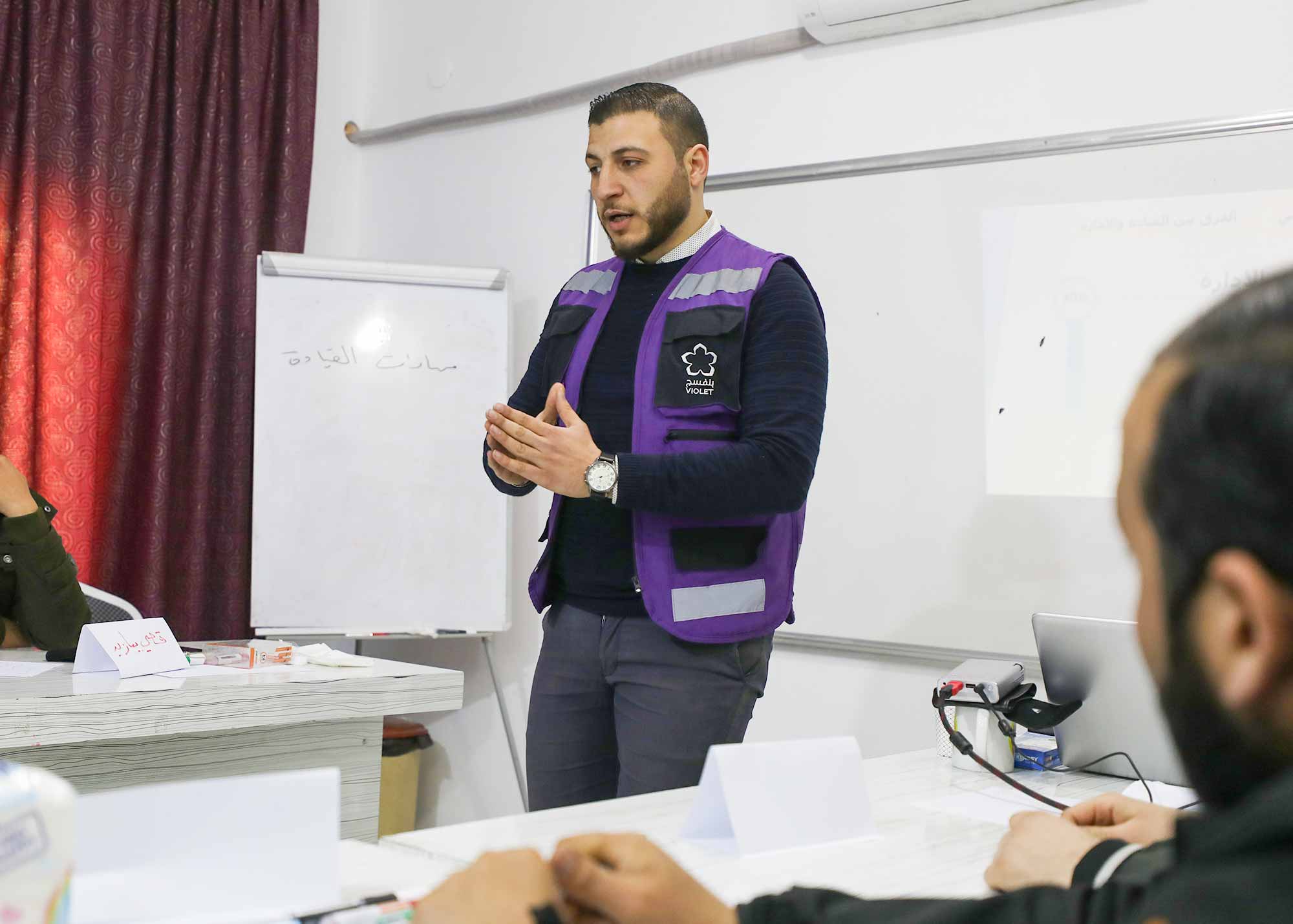 The emergency team had a clear impact on Muhammad’s life, who currently works as an emergency program coordinator and a trainer in leadership and disaster management at Violet.

Muhammad is 26 years old. He studied financial and administrative sciences and participated in various voluntary activities. Muhammad was one of the first participants in the youth skills development program established by Violet Organization at the beginning of 2016. During the program, he underwent several courses, including ambulance courses, disaster management and child protection, in addition to training Communication and leadership skills and project management training to prepare trainers.

After undergoing various trainings, Mohammed joined the emergency team and began working as a team member. In addition to participating in emergency activities taking place at the time, supporting community initiatives and increasing the role of youth in society.

But Muhammad’s ambition motivate him to progress and develop, so he moved from being a member to a team leader, and he continued for 3 years, during which he participated in all responses to the displaced from multiple areas and provided their needs, to then take the position of coordinator of field teams, then coordinator of the emergency program and trainer in the field of leadership and disaster management.

Muhammad also provided other training, such as basic training, which coincided with the opening of emergency centers in Jisr al-Shughur, al-Dana and al-Bab, in addition to various trainings he gave to students of Idlib University.

Despite the risks, he hurries to save the lives of others:

Muhammad tells us about his experience in saving lives: “In one of the responses that I participated in, we were trying to evacuate families from under the bombardment and the sounds of the non-stop shells, and we could hardly hear the walkie talkie, saying, “Turn off the car lights, the warplanes are watching.” Mixed tension Fear rises in the face of the team, the sounds of shelling continue and we have to move to save the others, as we advance, the car suddenly stops and it seems that we have fallen into a big hole, and the walkie talkie tells us again: “The place of execution is cleared, the military is back with execution.” We have to move. We left the car and walked on foot to help the others. , crowds of people wandering without a destination or place, carrying what remains of the memories of their homes, and some of them walk without memories.. We took the families to the car to take them to perhaps safer areas. One of the women told us while weeping: “Mohammed … Souad … my eldest son and his wife died and lost their children, and I, my son, do not know what to do.” Everyone does not speak, only the sounds of the shells and the tears of the displaced are heard all the way.. After that, we transferred the families to the center and provided them with the basic needs. .”

The work of the emergency department began in 2016 within the city of Idlib with the increased need for ambulance services in the north of Syria as a result of the increasing in the population due to forced displacement from all Syrian regions, which led to the overcrowding of the number of people living in the north between the displaced and the original population, and the escalation and bombing operations on Civilians, the small number of emergency systems, poor medical capabilities, and the displacement of a large number of cadres working in the health field, including doctors, nurses, and paramedics, all of this led to a large hole in the health sector in general and ambulance services in particular, hence the idea of establishing ambulance centers that depend on volunteer teams in their work, rehabilitating and training them in first aid, and then subjecting them to advanced training about ambulance to helping others and weak families in the north of Syria.

7 centers and thousands of trainees from volunteers and civil society:

With the beginning of opening of the emergency centers, 1,000 volunteers were trained in first aid and disaster management, in addition to training 10,000 people from the local community as the first responder in emergencies.

In 2017, the first ambulance center was established in Maarat al-Numan to reduce the gap between the southern regions and the city center in Idlib, followed by another center in Azaz in the same year, and in 2018 another center was opened in the western region of Idlib, specifically in Armanaz, to open two more centers In the years 2019 and 2020, in Jisr al-Shughur and Dar Azza, respectively, with the Maarrat al-Numan center completely out of service, another center was opened in al-Dana and in the al-Bab area to facilitate access to emergency services.

Services available all the time:

In its seven centers, the ambulance team provides urgent cases transportation services to hospitals and medical centers, in addition to transferring Corona cases with a separate work system in terms of tools used, cars and teams.

The number of transferred cases reached 53,170.

The ambulance team also provides simple services such as changing the bandage, giving oxygen sessions, and others, and the number of services provided has reached 52,526.

Under risks, and in emergency cases, the emergency teams in Violet work to provide various services to the people of the community within full readiness all the time.