The North Syrian camps during the winter 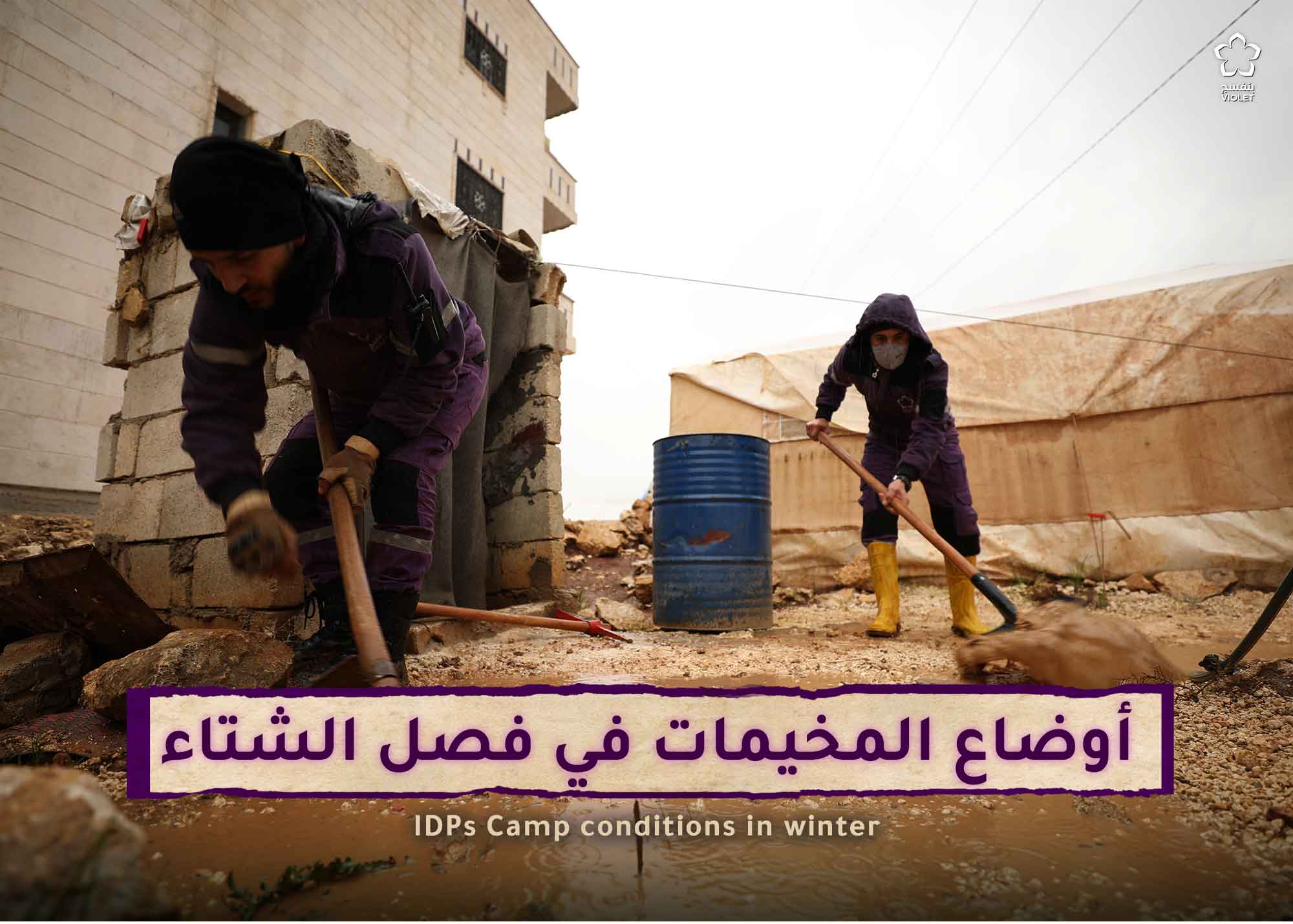 The Syrians face another winter while they are still in the camps, as this scene is repeated every year until it becomes familiar to the world.

The displaced are standing helplessly in the face of frost and floods, with the inability of humanitarian organizations working in northern Syria to provide heating materials and winter clothes for about two million displaced people.

Ten years of the same suffering.

It is not the first year of cold for millions of Syrians, as this year was not better, especially with the repercussions of the Covid-19 pandemic that Syrians have been suffering from so far, and the inability of the population to meet their needs due to high prices on the other hand.

The mud that covers the camp lands makes moving between the tents requires winter clothing requirements that most of the camp residents cannot secure, in addition to the fact that the tents they inhabit are not strong enough to deter rainwater and mud intrusion into them,

A large percentage of the tents are unfit for habitation after they were torn as a result of harsh weather factors, as the number of tents damaged by the heavy rain reached 2,145 tents, and the number of families directly affected by the rain reached 1,842 families, while the total number of affected families reached 3,742 families, and 470 families were forced to move inside the camp due to the damage to their tents, according to a report published by the Syrian Response Coordinators organization this month.

The “ship” tent drowned its inhabitants

In the Syrian camps, there are many types of tents, the most commonly used and the worst of all is the “ship” tent with its low ends, it does not have anchor columns and the floor cannot be isolated in it. The ship, which shelters many families living in the camps in the north of Syria, is distributed by most of the organizations operating there. However, it does not protect from the heat of summer or the cold of winter. It traps the air inside and does not last a long life. During the years of asylum, these tents were one of the most vulnerable types of tents to fires throughout the year and were not capable of repelling winter attacks from storms and rain, which pushed many of its residents into the open.

According to a study conducted by the Coordination and Support Unit on 680 camps in the governorates of Idlib and Aleppo, the results showed that 30% of the tents need rain insulators, while 20% of them need floor insulators.

Among the needs of northern Syria came the need for heating fuel, followed by the need for heaters of all kinds (diesel, firewood, coal, kerosene). According to the same study of the Coordination and Support Unit, it was found that 70% of the camps covered by the study did not have heaters distributed during the last winter.

Obtaining fuel in the winter season is the main obstacle for Syrian families, at a time when families suffer from weak purchasing power and scarcity of natural resources. It is worth noting that cutting trees to obtain firewood for heating has become a threat to the agricultural sector in the Idlib countryside.

Under these circumstances, family’s resort to the use of nylon and worn-out fabrics to provide warmth for their children despite the risks involved, such as the constantly occurring fires and the resulting casualties. In 2019, three children died due to fires that broke out inside the camps, while a family of 4 members (two children and their parents) suffocated due to the use of materials not suitable for heating.

Violet Organization and its emergency response to rainstorms

After the recent storm that swept northern Syria, the rapid intervention team in Violet responded by distributing insulation materials, pillows, blankets, and shoes for children, in addition to suctioning rainwater from the camps and creating a cross-bridge so that the people could cross to the other side.

This year, Violet Organization launched a warm winter campaign for its sixth year in a row, intending to provide winter clothes (coats-wear-shoes) and heating materials to the needy, in addition to distributing emergency winter bags to provide non-food winter materials (blankets – mattresses) in the event of any emergency.